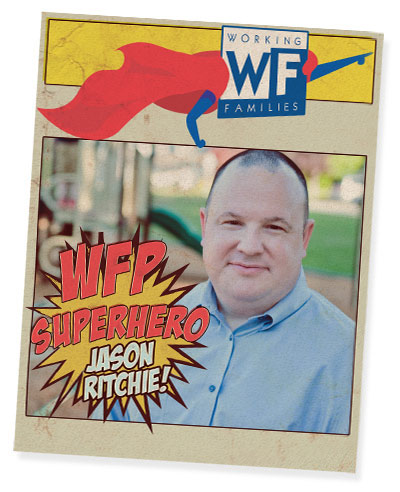 Now meet his opponent, Republican Jay Rodne. Jay recently derailed a bill that would enhance protections for sexual assault survivors because the NRA didn’t like it. Here’s Jay Rodne’s own words about Muslims (we left in all his typos and grammatical errors): “Islam is bariarian medievalism. How anyone people need to die? In the interim, Amicans, arm yourselves!!!!!”

For this Washington State district, the choice couldn’t be clearer. Jason Ritchie is the WFP Superhero who needs to win in November. But here’s the rub: Jason’s opponent is a well-funded incumbent. Especially in state and local races, well-funded incumbents tend to win.

You can help change that tide by pitching in $3 to WFP and Jason Ritchie’s campaign. Click here.

The Washington State legislature just barely has Democratic control. Another progressive Dem like Jason Ritchie in office can help tip the scales and ensure that Washington can raise the minimum wage, pass paid family leave and fully fund education.

Not to mention that Jason Ritchie supports obvious human decency things like protecting sexual assault victims and not condemning Islam as “bariarian.”

There’s just 8 days left in this election. An eleventh hour contribution from you could help make sure Jason Ritchie can mobilize a strong voter turnout operation. Click here to pitch in $3 to WFP and Jason Ritchie’s campaign.