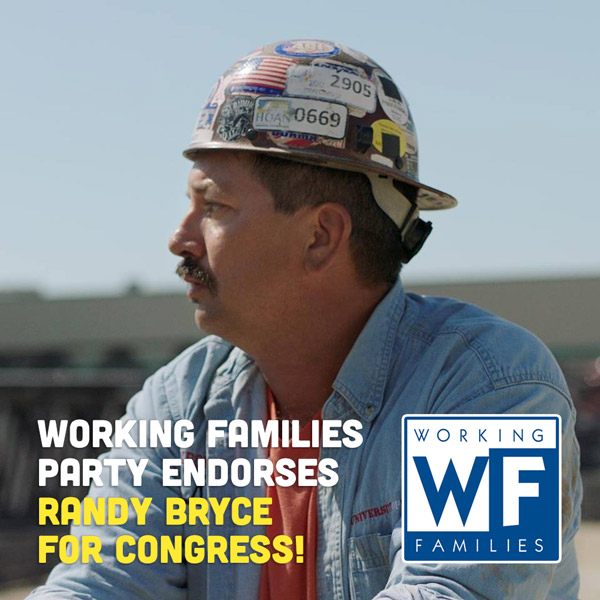 The Working Families Party is proud to announce our endorsement of Randy Bryce for Congress in his race to defeat Speaker of the House Paul Ryan.

This is our first Congressional endorsement of the 2018 cycle — and it’s a really exciting one for us. That’s because Randy is a Working Families Party candidate through and through.

Randy has been an active member of the Working Families Party since our Wisconsin state chapter launched in 2015. He’s a union ironworker, a veteran, and a cancer survivor. He has fought for single-payer health care, the Fight for $15 movement, and to improve the lives of working people.

We’re going all out to help defeat Paul Ryan in 2018. Will you pitch in to help elect working families champion Randy Bryce to Congress?

Since Trump took office, Paul Ryan has been running wild in D.C., trying to pass more massive tax cuts for the rich paid for by slashing the social safety net including health care.

But back at home, he’s running scared.

While Ryan has led the charge to take away health care from 22 million Americans, he has ruled out holding even a single public town hall meeting for his constituents in Wisconsin’s first Congressional District to discuss the bill.

Wall Street lobbyists still get to meet with Ryan. Millionaire donors too. But what about working voters in his district? Mothers with sick children, or those worried about how Trumpcare would affect loved ones on Medicaid? Paul Ryan has just decided they don’t matter.

The Wisconsin Working Families Party knew the only shot to defeat Ryan would be a working class champion who could speak to the concerns of voters who are sick of millionaire members of Congress like Wall Street Paul ignoring them. So Wisconsin WFP urged Randy to get in the race earlier this year.

Then, when Randy released his first campaign video, it went viral across America, with over half a million views. It’s easy to see why:

In the video, Randy talks about his mother, who suffers from multiple sclerosis and is worried that she won’t be able to pay for her medication under the terrible Republican health care bill.

Randy says he decided to run for office “because not everybody’s seated at the table, and it’s time to make a bigger table.” We couldn’t agree more.

This race isn’t just about Paul Ryan. It’s about taking on the entire Trump-Ryan agenda of tax cuts for the wealthy and pain for the rest of us. It’s about sending someone to Congress who will represent working people and lead the fight for working families. It’s about showing the entire country that we can contest every district with a message that inspires working people.

We have a chance to shock the political establishment to their core and forge a path for a progressive majority to take over the House in 2018. But Randy will need all of us to pitch in to pull this off.

Wisconsinites deserve action and solutions. We need help, and instead of providing what we need to survive, Republi… https://t.co/WWBtMFzfit