The New York Times just broke the news: the Working Families Party and our allies are launching a major campaign to target the eight renegade State Senators who run in their districts as Democrats but vote for Republican leadership in Albany.1

In the first 24 hours, we’ve already identified over 1,000 voters across these eight districts who, fed up with this hypocrisy, have committed to oppose ANY candidate who doesn’t support progressive leadership in the Senate. Will you join us?

Add your name: Tell New York’s Trump Democrats they must immediately end their alliance with State Senate Republicans or they will be voted out of office. 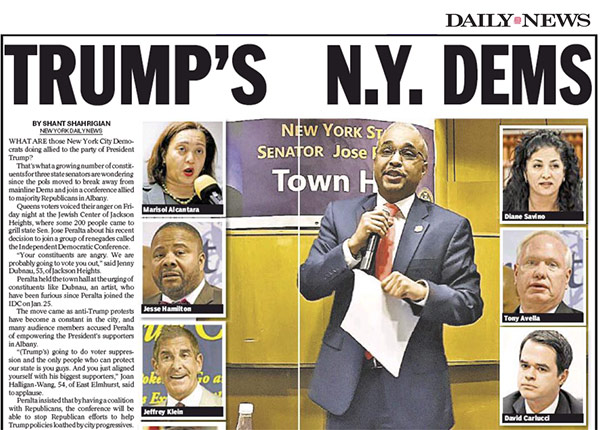 New Yorkers need elected officials who will stand up to Trump’s attacks on working families, not Trump Democrats whose alliance with Republicans in the State Senate is blocking a progressive agenda.

In the weeks ahead, hundreds of volunteers with #NoTrumpDemocrats will contact tens of thousands of Democratic voters in all 8 districts to ask voters to pledge to ONLY support candidates for Senate who support progressive leadership.

Tell New York’s Trump Democrats they must immediately end their alliance with Republicans — and let us know how you can get involved in this campaign.

There is too much at stake with Trump and the Republicans in power. New Yorkers need a progressive majority now to defend against the attacks on working families.

The Governor offered to cook for his billionaire donors. Meanwhile, thousands of New Yorkers are jobless + hungry w… https://t.co/D4LMfRJ4Mu