After going on strike for 9 days, West Virginia teachers and support personnel just secured the 5% raise they had been demanding. But they didn’t just secure a raise for themselves, they secured a 5% raise for ALL state employees across West Virginia.1

Will you sign our thank you card to the West Virginia teachers and support personnel who stood strong and secured a 5% pay raise for all state employees? Click here to add your name: 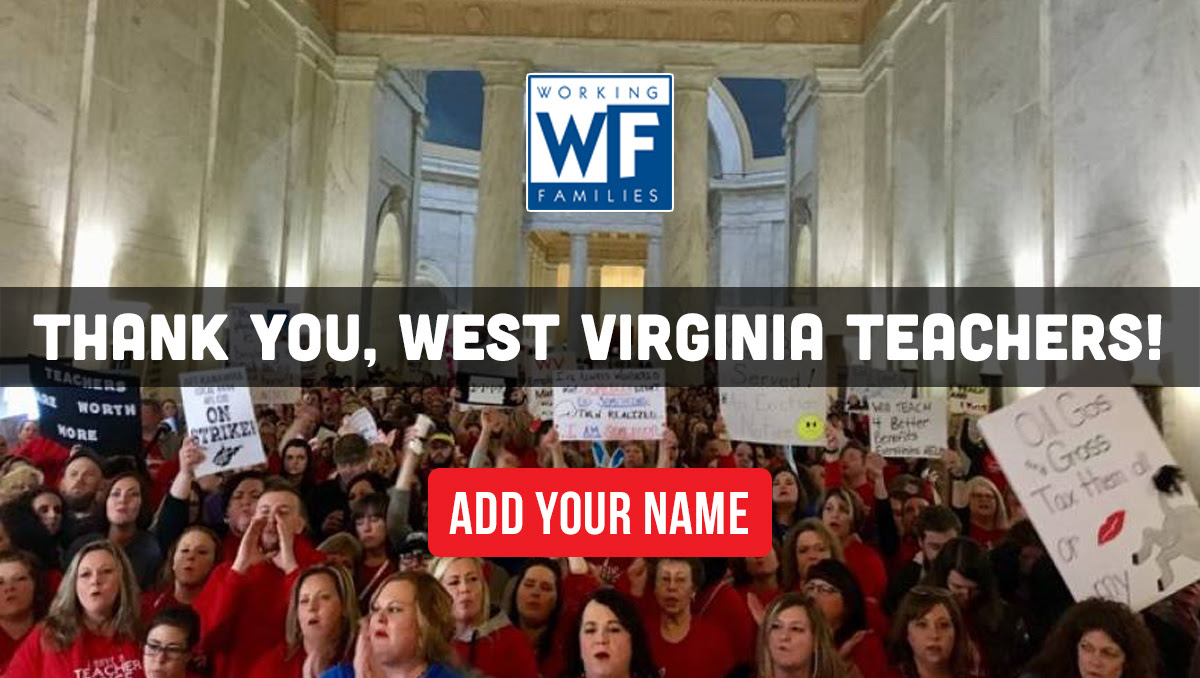 As the State Director of West Virginia Working Families Party, it has been my honor to stand arm-in-arm with the workers who went on strike from all 55 counties of our state over the last few days. Because West Virginia does not recognize the right of public employees to collectively bargain, these teachers went on strike at great risk to themselves and their livelihoods. But they stood together, united in solidarity, and settled for nothing less than the 5% raise that they deserved.

Their bravery has inspired a nation and exposed deep fissures in our state — how legislators are bought and paid for by the coal and gas industries and how state spending is tilted in favor of funding big business rather than the health and welfare of West Virginians.

At a time when Republicans are conspiring to dismantle public employee unions through right-to-work laws and the Janus v. AFSCME case now before the Supreme Court, the unity of these workers shows us how crucial unions are in ensuring a measure of dignity and economic security for working people. They’ve shown the way for workers in even the reddest of states — how to find their voice and use their collective power to move policy. Now teachers in Oklahoma and Kentucky might go on strike too!2

We do not, however, owe any thanks to our Republican legislators or governor. We should not have needed to be out of school for 9 days to get a sliver of respect for our public employees. Our state has suffered due to their misguided priorities of tax cuts for the rich while the rest of us struggle to make ends meet.

So while today we celebrate a victory of unity, tomorrow we look toward the future. There is so much work ahead of us, but we remain #55United and #55Strong!

Click here to sign our thank you card to the striking teachers and support personnel to let them know we have their backs.

Thank you all for your support and solidarity,

2. Could Wildcat Teachers’ Strikes Spread to Other States?, Bloomberg, March 6, 2018

To anyone who feels like they “wasted” the time during quarantine because they didn’t write a book or learn a secon… https://t.co/gI4BSrH59X