On Monday night, as Trump was planning to announce his Supreme Court pick, I couldn’t just stay at home and watch. So I joined other New Yorkers and protested outside of Trump Tower in Manhattan. I called on all Democrats to stand up and fight against this nomination. And I was arrested. 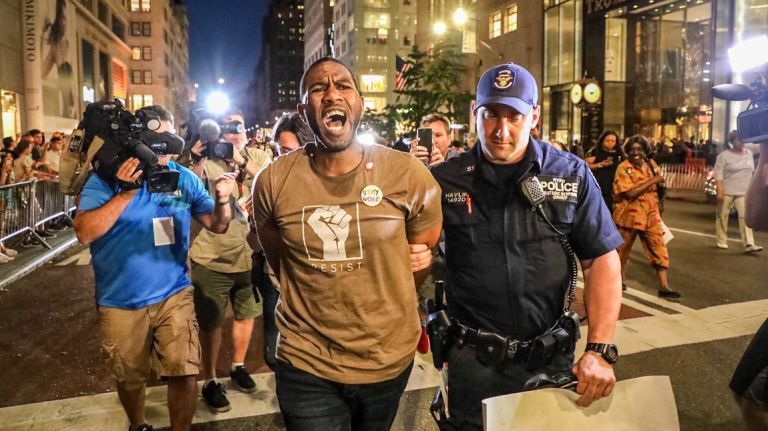 For decades, we’ve fought so hard for protections for black and brown people, for workers, for immigrants, for the LGBTQ community, for women. If Trump gets his way, all of this could soon be swept away by an extreme-right majority Supreme Court — not only because of bigoted Republicans, but also because too many Democrats refuse to step up and fight with all they have.

I’m not running for Lieutenant Governor of New York just to sit on the sidelines. I’m doing it because our elected officials need to be willing to actually fight for the people they want to represent. And if we can’t count on our current leaders to do that, then we have no choice but to do it ourselves.

Can you make a $3 contribution? Every dollar means more support for our progressive movement and brings us closer to victory. I can’t do this alone.

Moments like this are why it matters who represents us in Washington — and in Albany.

If Trump, his Supreme Court nominee Brett Kavanaugh, and the rest get their way, then we can say goodbye to Roe v. Wade. We can forget about ever overturning Citizens United. Voting rights and civil rights will be placed under a decades-long siege.

For years, Governor Cuomo and Lt. Governor Hochul have had every opportunity to pass progressive legislation that would protect New York’s working families, including ensuring that women have access to safe and legal abortion. But instead, they thought it was more important to empower Republicans in Albany and keep taxes low for the mega-wealthy.

Activism and leadership take courage. We need to get off the sidelines and into the streets to prove that change and resistance require more than just a hashtag or a tweet.

Together, we can build a movement that can stop these horrific policies — and start enacting visionary ideas of our own. If that’s a reality you’d like to see come to pass, then I need your help:

Contribute $3 »
Every single bit helps. Every call, every dollar, every door knocked — it all makes a difference. And it makes me so glad to know that I can rely on your support.

.@MikeBloomberg has tried to rewrite his horrific record with half a billion dollars in ads. But New Yorkers of col… https://t.co/vEvvFIBT4W