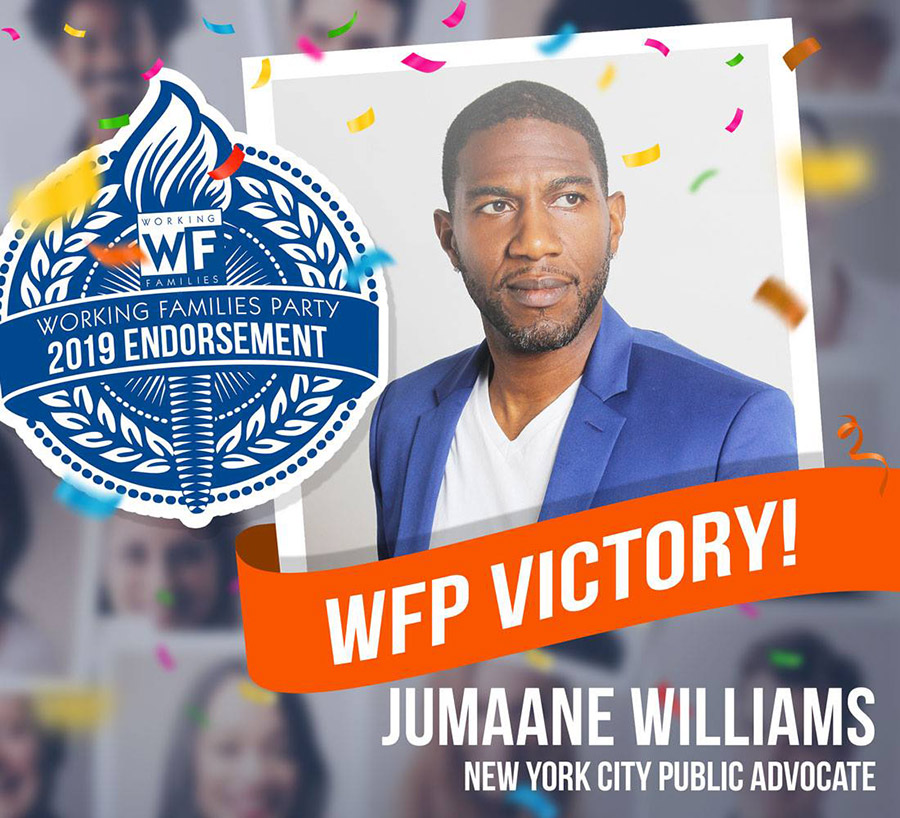 This was the first big election night of 2019. And it was a huge one for the Working Families Party.

In New York City, WFP’s Jumaane Williams defeated a field of 17 candidates to win his special election for Public Advocate — the second-highest office in the city!

The Working Families Party has been with Jumaane since the beginning, when he took on the establishment to win his City Council seat in Brooklyn ten years ago. Now he’ll be able to champion his people’s agenda of criminal justice reform, police accountability, fair and affordable housing, choice, and equality for all from one of NYC’s biggest platforms.

And in Chicago, our allies at United Working Families helped power a diverse slate of progressive candidates to wins and runoffs in city elections, including Maria Hadden, a queer Black activist who defeated a close Rahm Emanuel ally, and Jeanette B. Taylor, one of the hunger strikers who fought to keep Dyett High School open in 2015 and ended the career of a longtime party boss.

These are game-changing victories for the Working Families Party, our allies, and partners — and a testament to what working people can achieve when we band together. But 2019 is just getting started, and there’s so much more we can do.

Can you chip in to build on this momentum? Your grassroots contributions will help elect more real activists and champions of racial, social, and economic justice across the country in 2019, 2020, and beyond.

We saw it in New York last year when WFP defeated the turncoat Democrats of the IDC in the State Senate and elected a new progressive majority. We saw it across the country, when WFP-backed candidates like Stacey Abrams and Andrew Gillum came inches away from groundbreaking wins in red states. We’re seeing it with the activists and teachers across the country who have been striking, protesting, and now running for office and winning.

And we saw it again last night, with the election of movement activists and grassroots champions — and a rejection of politics as usual.

These wins show what’s possible when working people unite to take on the establishment and fight for justice and change. Working Families Party organizers, activists, and allies have time and time again played pivotal roles in wins like these. But these moments are only possible because of you. Let’s create more of them.

Please chip in just a few dollars — any amount helps — before our end-of-month deadline to help us keep challenging politics as usual and electing a new generation of progressive leaders to office across the country.

I was pepper sprayed and handcuffed tonight along with @YourFavoriteASW. We came in solidarity and to keep the peac… https://t.co/rc38tYl7de