It’s only been a few days since Rep. Alexandria Ocasio-Cortez and Sen. Ed Markey released their groundbreaking Resolution for a Green New Deal in Congress. But already, Republicans and their billionaire puppetmasters are responding to it with attack after attack.

From Fox News pundits to Trump’s Twitter feed, they’re spewing the usual disinformation to try and slow our incredible momentum. We need to show the entire country that their lies and scare tactics won’t work — and that we will be in this fight for as long as it takes.

We are asking Working Families Party members across the country to sign up as a grassroots co-sponsor of the Resolution for a Green New Deal. Can you add your name to help us show Republicans and Democrats alike that working people demand a Green New Deal? 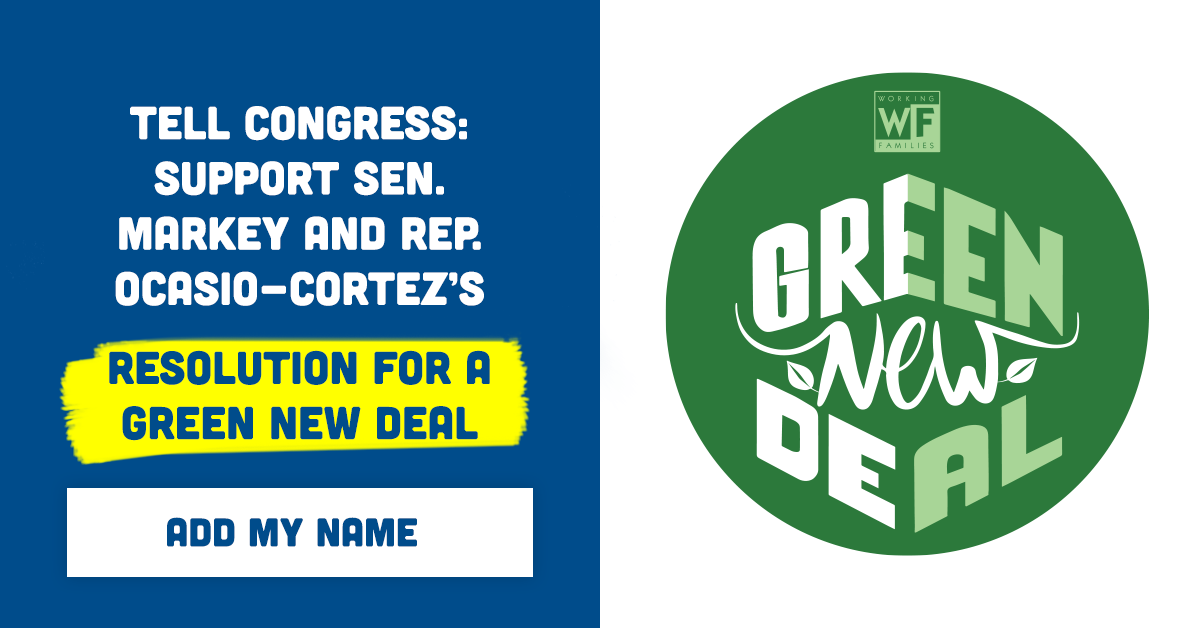 This resolution shows us what a Green New Deal needs to look like if we are going to act within the next 12 years to meet this crisis head on.

It outlines a plan to move our nation to 100% clean and renewable energy, a just transition for all communities and workers who have been impacted by climate change or depended on fossil fuels, and a job guarantee with a family-sustaining wage for everyone in our society.

Republicans are frantic about it because they are seeing the same thing we all are: Real momentum, now inside the halls of Congress, for solutions that are big and bold enough to meet the scale of the climate crisis that is currently unfolding.

Over 67 representatives and 11 members of Congress have already signed on as co-sponsors of the resolution. Nearly all the major Democratic 2020 presidential contenders are backing it. And the policies themselves are incredibly popular among the American people, with 92 percent of Democrats and 64 percent of Republicans in support.

We’re showing the entire country that the types of choices we are facing in this crisis don’t need to be “either-or.” That good-paying jobs can be green jobs. And that if we’re going to meet the challenge of this crisis, we will need to do it in a way that guarantees economic security, racial and social justice, and workers’ rights as well as a livable planet.

Can you join as a grassroots co-sponsor of the Resolution for a Green New Deal? Let’s show Republicans and corporate Democrats alike the power of our movement.

.@MauriceWFP taking questions from attendees at @thenation forum and the New School Free Press after the event https://t.co/QDVo9VOUGA