This article originally appeared in The Progressive on May 2, 2019

The first time I met Marva Herndon and Gail Hicks, in 2014, they took me riding around Milwaukee in Herndon’s RV, on an unofficial tour of fly-by-night voucher schools, housed in crumbling strip malls and corner stores. We saw an eighth-grade science class in which students were instructed in creationism, and we watched children play among the cars in the parking lot of a school located in a rundown office building with no playground.

Incredibly, these schools were funded by the public, through Milwaukee’s school-voucher program, which allowed shady private operators to collect taxpayers’ money by getting into the education racket.

Herndon, a computer programmer, president and founder of the Bryant Heights neighborhood association, and mother of four graduates of the Milwaukee Public Schools, grew up in a thriving middle-class African American community in Milwaukee, and attended integrated schools. So did Hicks, who actually knew Democratic state legislator Polly Williams, the public face of the original school-voucher program in Milwaukee, which she promoted together with former Governor Tommy Thompson, as a way for poor kids to get out of underperforming public schools and into better, private schools. The program, which has expanded dramatically over the years, has been transformed into something unrecognizable. Over the years, even as Republicans moved to replicate it in other communities around the state, it has produced no improved academic performance in kids, massive instability and huge costs.

Residents have watched the resegregation of Milwaukee schools through privatization schemes, even as the city’s African American community struggled with growing unemployment and a school-to-prison pipeline.

Both Herndon and Hicks have watched the resegregation of Milwaukee schools through privatization schemes, even as Milwaukee’s African American community has struggled with growing unemployment and a school-to-prison pipeline. The two of them started a group called Women Committed to an Informed Community, to spread the word about how private interests were targeting poor kids in Milwaukee, particularly in the African American community, draining public money from public schools and delivering a shockingly substandard education.

This week, I caught up with Herndon and Hicks again, at the April 30 swearing-in ceremony for Milwaukee’s new school board.

Herndon just won a seat on the board in a historic election, as part of a slate of five candidates supported by the Working Families Party. The nine-member school board, long hospitable to private interests pushing vouchers and private charter schools, is now controlled by an eight-member pro-public-school majority.

That’s big news in a city that has had a giant target painted on it by the powerful national school-choice lobby. Milwaukee was the first city in the nation to introduce school vouchers thirty years ago. It is also the first city in which both the city council and the school board can authorize privately operated charter schools—which are at the center of a current public scandal.

As the new members of the school board were sworn in, promising to uphold the constitution of Wisconsin and the United States in the downtown Milwaukee Public Schools auditorium, former Milwaukee school board President Michael Bonds was preparing to appear in federal court in Philadelphia on May 6. He faces charges that he took bribes from executives of the Philadelphia-based Universal charter school company.

Universal opened three charter schools in Milwaukee in 2013, received millions of dollars in public funds (in part thanks to the votes Bonds cast, allegedly in exchange for bribes), and then abruptly closed them all down in 2017, leaving hundreds of students stranded in the middle of the year.

“That’s why we worked so hard to flip the board,” said Herndon after the swearing-in, as she and her fellow victors on the school board posed for photos. “Without accountability, there are so many opportunities for corruption.”

Friends and family members snapped photos and shared sheet cake and punch, as the “Fab 5” celebrated their victory. The group represents a solid bloc of public-school advocates—community activists who overcame the pro-privatization candidates in a city with a long history of racial segregation accelerated by powerful outside forces that seek to privatize the public schools. 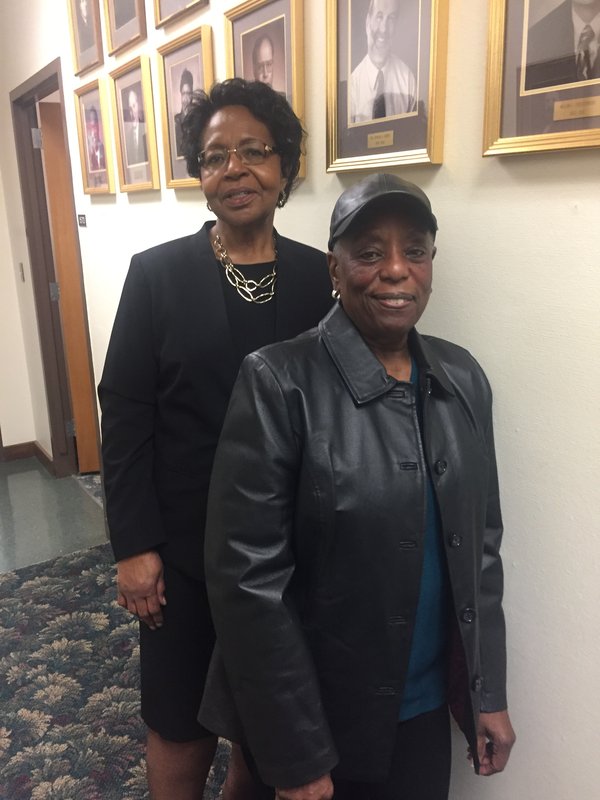 “We started out together and wanted to do everything together—none of that individual stuff. It was a team effort,” said Herndon.

“The fact that the five of us got elected is an indication that there’s a growing recommitment to public education and increasing concern about the impact of privatization,” Bob Peterson told me. The former president of the Milwaukee Teachers Education Association and a founding editor of Rethinking Schools magazine, he won the at-large seat on the board against a pro-privatization candidate.

“Hopefully this school board can start to stabilize things,” said Hicks, who, along with Herndon’s husband, daughter, minister, and other members of the community, came to witness the swearing-in.

Even before the election, Herndon and Hicks had begun to make progress on raising public awareness and shutting down the sleaziest of Milwaukee’s storefront voucher schools.

The two women attended every meeting of the city’s zoning board, which approved the schools.

“We were not missing a zoning board meeting for years, because it was like the Wild West,” Herndon recalled. Because of waivers granted to Milwaukee’s voucher-school experiment, the schools needed nothing more than zoning and occupancy permits to open their doors (they were exempt from curriculum standards, teacher qualification requirements, even minimal building codes.)

“How do you put a school in a rootbeer stand?”

The last time Herndon and Hicks saw a voucher-school proposal come before the zoning board, Herndon recalled, “a pastor and his wife wanted to open a school in an old A&W,” Herndon recalled.

“How do you put a school in a rootbeer stand?” Hicks chimed in.

Herndon and Hicks were part of a group of citizens who, in 2012, decided to push for an ordinance imposing building-code requirements. School-choice advocates fought back. The compromise city ordinance required schools give children access to playground space. That wasn’t all that the citizen group asked for, but it was enough to make the difference.

It became harder for the kinds of schools that set up shop in a rootbeer stand to win approval. As a result, Herndon said, “Those fly-by-nights are mostly gone.”

But the fight for an equitable school system continues.

Sequanna Taylor, one of the “Fab Five” who works with disabled children and their parents as a paraprofessional in the Milwaukee Public Schools, was headed to Washington, D.C., the day after the swearing-in. As a member of her union’s national board, she was going to speak to members of Congress about “what’s needed for our babies.”

“Regardless of zip code our babies deserve a good public education,” she said.

Among Taylor’s top issues are ending the school-to-prison pipeline, fully funding classrooms, engaging more people of color “so our students see people who look like them,” and clearing up confusion among parents and community members about whether vouchers and private charters are actually better than public schools.

“People were mis-educated about what these schools are, and just wanted the best education for their babies,” she said. “Now some [including the Universal Academy for the College Bound charter school] are closing in the middle of the night—kids come back from spring break and there’s no school.”

All five of the new school board members ran on a promise to impose a moratorium on new private charters.

The candidates were recruited by the Working Families Party, a national coalition of labor unions and community groups that supports progressive candidates in city and state government across the nation, pushing for economic and racial justice, democracy, and a more robust public sphere.

Priscilla Bort, a Working Families organizer who helped the Fab 5 campaign, came over from the Democratic Party of Wisconsin, where she worked on Tammy Baldwin’s successful recent Senate campaign.

“Milwaukee has a lot of eyes on it because of privatization,” Bort said, “and the Working Families Party backs free public education for all.”

Bort worked with all five school-board candidates on gathering signatures and knocking on doors together. “All five of them worked incredibly hard—there were a lot of long nights and weekends. And they worked together so well,” she said.

“My favorite thing I saw in the campaign was how everyone has this big MPS pride. I would listen to them on doors, and no one said, ‘I don’t have kids in school so I don’t care.’ The schools are a reflection of your city, and a point of pride. People were engaged. It was really awesome to see people so excited for a small, local election.”

Bort left the swearing-in to fly to Oregon, where she is working on more Working Families Party campaigns.

Around the country, the same drama is playing out, as citizens organize to defend local democracy and community assets including their public schools.

The new members of the Milwaukee school board have their work cut out for them. All of them have spoken about the need to reduce class sizes, to restore funding for art and music, to address the needs of families with an array of services. And then there is the problem of a teacher shortage, exacerbated by low salaries and a perceived lack of respect for teachers ever since former Governor Scott Walker began cutting school budgets, busting teachers’ unions, and imposing a raft of other destructive policies. 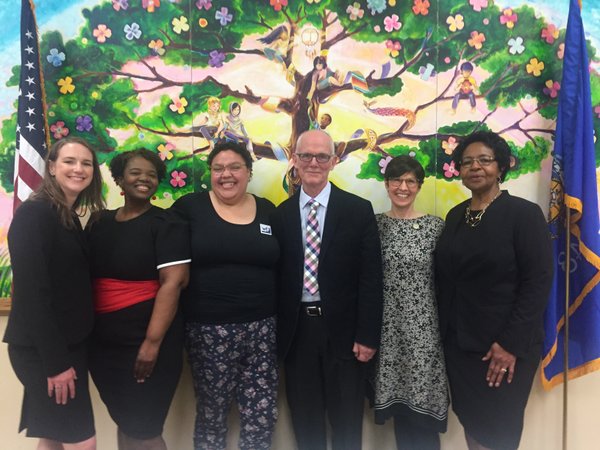 “It took so many years to destroy the system. It’s going to take twice as long to restore it,” Herndon said.

She recalled how the old board welcomed private operators who planned to take over public schools.

“You take this oath, and then you sit on the stage and try to destroy the school system you’re supposed to be protecting. How do they live with themselves?”

“The good thing is we all know each other,” she added, as she and Peterson chatted over punch and cake. “We have worked together for years. It’s going to be amazing—and there are no charter advocates on the board. That’s amazing, too.”