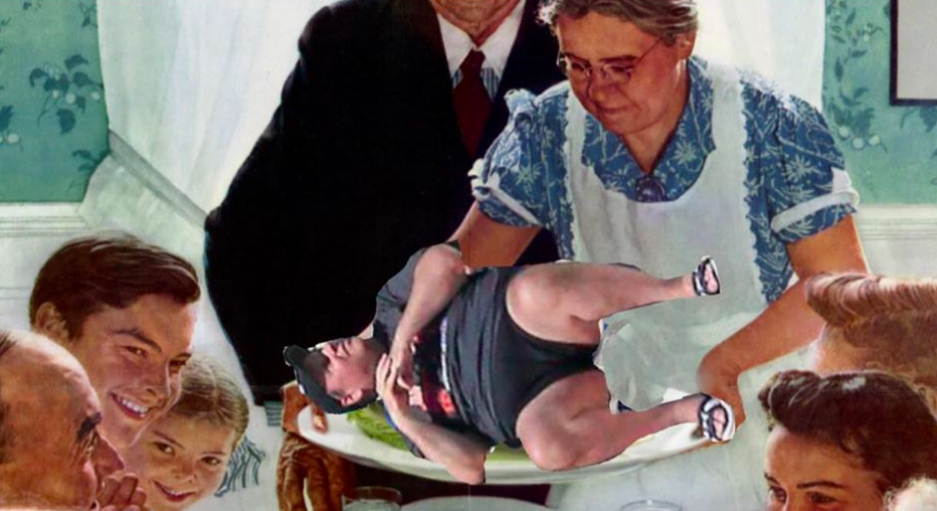 Thanksgiving is arriving early this year!

We are thankful for someone we admit we’ve been pretty hard on all year: George Norcross. Why are we thankful?

Are we thankful for George’s philanthropy? (You know, moving his insurance business 12 miles to Camden in exchange for $86 million in tax credits, the nightly 90s laser light show emitting from the building, no local hiring requirements, a luxury building on the Camden waterfront (we hear his luxe office has ahmazzzing views), and a free pass on paying the City property taxes under legislation his one brother sponsored and another brother helped secretly draft?)

Are we thankful for the company he keeps? (What a list! Chris Christie, Donald Trump, Steve Ayscue, Joe D, Arthur Barclay, Jeff Van Drew, Alec Baldwin, the Carpenters Union, Wannabe Governor Steve Sweeney, all the other members of Mar-a-Lago…)

No, that’s not it either.

What we are truly thankful for this week is George’s ego.

He just can’t help himself. With the Trump impeachment inquiry going on, we admit it has been hard keeping editorialists, columnists and reporters actively interested in the EDA scandal.

But… just when you thought the scandal may have been dying down in the press, guess what’s coming to Trenton and Montclair next week? The Camden Rising Comeback Tour!!!

Shout out to George and The State Street Band for his upcoming performance and reminding everyone next week why there is an ongoing federal criminal investigation, state grand jury, and Task Force staffed by former mob prosecutors looking into whether the State of New Jersey was defrauded of millions, perhaps billions, of taxpayer dollars.

Groupies on the Tour Bus: Max Pizarro reported yesterday that the Camden County Democrats are working with the Southern NJ Building Trades Council to coordinate buses to bring a portable cheering squad to Trenton Monday. All hands on deck to make sure the experience in Trenton Monday is as curated as possible for King George!

Bussing in Groupies from every trades union on the east coast (bagels included!) is a little sad, to be honest. If we were them, we’d hold out for a helicopter ride. #PleaseCheer

Jim Walden and the Tax Incentive Task Force: Oh snap! George refused THAT task force to testify in front of HIS task force, to avoid hard questions. So the Task Force has released a list of questions that should be asked- and in doing so, released some new information and new evidence of likely fraud. Will there be any profiles of courage on the Senate Committee on Monday?

Our favorite question is the one that involves Dan Fee’s 2015 warning to Conner Strong’s CEO: “It will be difficult to walk the line that needs to be walked- highlighting…the involvement of you and George without crossing any line to confirm that Conner Strong is likely moving its headquarters.”

Could it be that NJ taxpayers gave this firm $85 million in tax incentives when there was never any intention to leave? Can someone please ask that? Please?

New Jersey progressive activists! The Intercept headline says it all:  “Under Pressure from Left, New Jersey Democrats Back Off Vote to Gut Minimum Wage Law.”

We believe the charismatic Senator Vin Gopal may have a bright future ahead once he distances himself from certain characters but, let’s be honest, you know it’s a rough week when one of the Norcross brothers says your bill is way too conservative.

Congressman Bill Pascrell: How about 82-year old Congressman Pascrell delivering this complete smackdown of Rep. Devin Nunes: “The ranking Republican just referenced a member reading the *validated* Steele Dossier into the Congressional Record- that was me!” Pascrell tweeted. “And I’d do it again.” And he didn’t even need to poke fun of Nunes’ yearbook photo either!

NJ.com: Thank you for running “The ‘Blue Wave’ missed N.J. Here’s how we take back our state,” which had 2.6 thousand shares by your readers. Yes Norcross allies in Essex, Middlesex, Union and Monmouth – you can continue to pretend that progressive anger at corporate Democrats isn’t real, it isn’t meaningful, it isn’t worth paying attention to. I guess we’ll have to wait and see…

Camden Resident Keith Benson: This just in! “We’ve got some real questions for George Norcross on the EDA Scandal.”

Among them: “You were picked up on FBI wiretaps around the time period your insurance company was preparing to apply for tax incentives. Your attorney claims that the investigation has been closed. The Justice Department won’t release those tapes without your consent. In the name of transparency, will you publicly ask for the release of those tapes?” Wow!

We agree with you, Mr. Benson, let’s hope this gets the creative juices flowing!

Blind, elderly African American war veterans in Essex County:  What better way to celebrate Veterans’ Day this past week by announcing the guy who was caught on video punching a blind, elderly African American war veteran currently has the votes to overthrow the current and perfectly capable Democratic State Chairman in New Jersey? Only in New Jersey.

Wyatt Earp: Let’s get this straight. As Ocean County Democratic Chairman, you get your butt kicked everywhere except for Brick. And then a couple days later you endorse convicted criminal and former Ocean County Republican Chair George Gilmore’s former business partner to become the next Democratic State Chair. (We’re sure this had nothing to do with your employment with a Trade Union close to Steve Sweeney). And you do so, even though Jones’ lobbying firm represented Chris Christie’s biggest Hurricane Sandy Contractor that was fired and accused by Shore homeowners of waste, fraud and abuse.

The Dream Team: George Norcross’ attorneys just filed an appeal in Norcross v. Murphy, the case Judge Jacobson dismissed in a blistering opinion this summer.  But then again, more billables!