Not too long ago, even the most powerful in Trenton were afraid to whisper the words “George Norcross.” Flash forward to 2019: “Down with King George” and “FBI, FBI.” We can still hear the echoes of the voices of the scores of protesters who chanted outside a raucous Senate hearing a few weeks ago. The end of 2019 marks the beginning of an end of an era.

In many ways 2019 was a perfect storm: Grassroots energy and anger at the Trump administration of course, but three years post presidential election, activists were seasoned, savvy and focused on our very own Soprano State Trump. To be sure, our New Jersey Trump spends less time on Twitter (at least publicly), and his Orangeness is not as pronounced as the President’s, but George Norcross and the POTUS have much in common- as Jay Lassiter reminds us, Mar-a-Lago is just the beginning.

#TakeBackNJ activists are buttressed by a Governor who is not “of” New Jersey’s political scene and willing to take it on; national journalists with a mandate to investigate the bosses of NJ; a real-live unfolding political scandal, with billions of dollars at stake in one of the country’s most marginalized cities; and just recently, a flip-flopping Congressman prompting Democrats from across the country to ask what’s wrong with NJ? Well, America, where to begin!

But there was incredible hope in 2019 also. We saw grassroots leaders emerge, we read new voices on social media and in op/eds. A task force, led by Ron Chen, walked us through the finer points of office relocation best practices, how the EDA gets compensated, and phantom alternate locations. We know of at least one criminal referral and two investigations, including the Big One- the Eastern District of PA.

We know so little about the jobs created, and yet so much about who owns the property and the aerial rights on the Camden waterfront. Surprise! It’s all about the real estate, baby!

Twitter: We can’t look away! This year, “regular” people realized they can become influencers and thought-leaders. Here’s to grassroots power, built with relationships and in-person actions, boosted with banter on Twitter. #TakeBackNJ trended this year (woohoo, that’s us!), the #MontclairMafia was founded to run bootleg avocado toast down the Turnpike, and @njgov took NJ ‘tude viral. Cheers to the social media platform we all hate to love!

John Currie and Leroy Jones: It could have been real ugly. Instead, deals were struck outside the normal power paradigms in NJ, and we’ve got what basically amounts to a win-win situation. A win for everyone except Steve Sweeney and George Norcross, who were cut out of the deal. So it’s a win-win-lose, which is a win for NJ.

Tammy Murphy: She handles the Governor’s dad jokes and Hawaiian shirts with the grace and agility of a ninja. That and she’s using her power to bring attention to maternal health.

Good Lawyers: Great year for Ron Chen, Jim Walden, Pablo Quinones. Lawyer highlights of the year include the incredible work by the task force reports (link here and here), as well as the scathing letter sent by Walden in response to the ridic letter sent to the Governor’s house by Team Norcross: “It seems abundantly clear that you are attempting to threaten a public entity tasked with investigating a matter of great public importance.” Ya think? Oh, and we loved when Quinones reminded us that “There is real criminal exposure to companies that lie to the EDA.” Ah, 2019 was the year of the Good Lawyer!

Gender and Politics in NJ: The #MeToo movement and an important corresponding conversation about gender and politics is underway in NJ, but we still have a long way to go. From this week’s piece on NJ.com by Kelly Heyboyer and Susan Livio: “’It remains difficult for women to break into New Jersey politics. The state’s complex political system includes powerful chairs of the Democratic and Republican parties in each county who serve as “gatekeepers” and help decide which candidates get on the ballot’, said Debbie Walsh, director of the Center for American Women and Politics at Rutgers University. ‘Five of New Jersey’s 21 Democratic county chairs are women… It makes it tough for any outsider to get in… In New Jersey, it feels like there are a few men who are moving the pieces on the chessboard, and that system does not make it easier for newcomers and people perceived to be outsiders.’” Important as we move into 2020: The fight to #TakeBackNJ is also a fight for gender equity, for racial equity, for welcoming a panoply of independent voices into NJ politics. We will all be better for it!

Whoever is running Steve Sweeney’s Twitter account: From donuts, to ice cream flavors to New Year’s resolutions…ratioed every time.

Progressive Advocates: Congrats to all those who saw big wins after years of organizing: #LetsDriveNJ and #1844NoMore. Steps towards justice!

Steve Ayscue: Steve who? (We briefly considered putting him in the W column for inspiring one of the best parody accounts around.)

Camden City: It is still unbelievable to us that the generational disinvestment of this city was used as an excuse to enrich machine bosses. How? Well, where to begin: The choicest real estate in Camden went to powerful corporations and individuals connected to George Norcross. $1.1 billion of tax incentives went to companies connected to the Norcross family. Some very high (yet still unknown) percentage of the jobs on the waterfront belong to suburbanites who drive in and out each day, those massive parking garages are there for a reason! Only 3% of construction jobs went to Camden residents. A supermarket wasn’t built in Camden due to the meddling of Parker McCay. Norcross likely used his political muscle to push a Camden nonprofit out of lucrative real estate. Thanks to local property tax abatements on TOP of tax incentives, Camden’s financial situation will continue to be difficult.  And yet, we’re supposed to believe all of this “development” was done in the name of the City? Come on, now.

The Other Lawyers: Terrible year for attorneys Kevin Sheehan, Parker McCay, Bill Tambussi, Lou Cappelli, Michael Critchley… somehow we don’t think 2020 will be much better. Brace yourself, lawyers for the Dark Side! It’s gonna be a lonnnng year.

Dan Fee: Worst job in the universe. Couldn’t have happened to a nicer guy.

General Majority: Lost money, lost elections, lost clout, had to pay donors back with George’s own money. Not how bundlers usually roll.

Jeff Van Drew: When a system is corrupt, it produces bad outcomes. And the same Committee Chairs that brought you JVD have anointed Brigid Harrison (without committee input!), a figure who has been a public cheerleader for the EDA, and a repeater of Norcross talking points, particularly against the task force. But now there is an expectation that progressives and good-government advocates will magically line up behind her. What’s the definition of insanity again?

Phantoms: Phantom locations, phantom candidates, phantom taxes, phantom jobs… Matt Freidman’s great piece exposed a shady practice used in Camden County for years. Will the County be so craven as to run this play again in 2020, this time with journalists and national campaigns watching? Will the task force or federal investigators find any more falsified locations on tax incentive applications? How about fake property taxes to boost incentive awards? Will we ever get real jobs data? Only time will tell!

Loser of the Year: I bet you can guess! May 2020 be worse for party bosses and even better for the people of NJ!

Op/Eds from Grassroots Voices or Pieces About the Grassroots Movement

NorthJersey.com A New Jersey army of liberal activists vow to destroy their own party ‘machine’

New York Times Why a Progressive Democrat Was Dragged Out of an N.J. Senate Hearing

Philadelphia Inquirer New Camden tower is a monument to New Jersey corruption. Unfortunately, we have to look at it.

NJ.com The ‘Blue Wave’ missed N.J. Here’s how we take back our state

NJ.com Noble Cause Corruption in Camden

Thanks for reading this year, and see you in 2020! 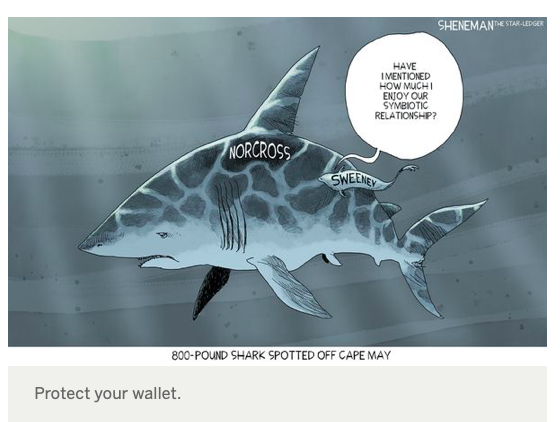