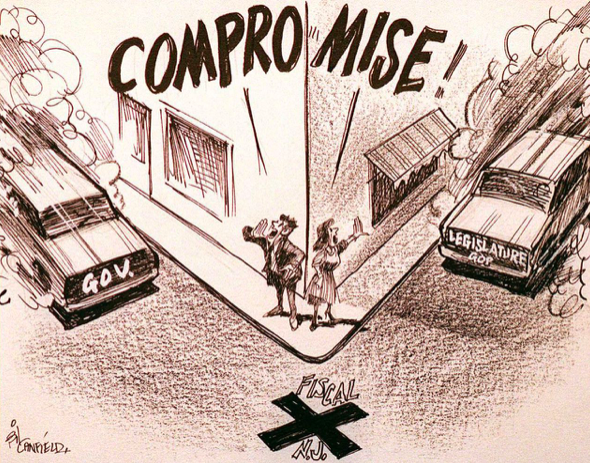 Winners & Losers: A For Effort!

Prolific former NJ.com cartoonist Bil Canfield died this week. As his obituary noted, “He never lacked for material. “After God created cartoonists,” Canfield once said, “he realized they needed a subject. So he created New Jersey.”

We offer one of Mr. Canfield’s evergreen cartoons, above.

Pro-Democracy Advocates: What a day! Winners & Losers is a day or two late this week (Yes, we got your emails, no, you didn’t miss it!) because we were busy in New Brunswick yesterday with our allies in the #TakeBackNJ coalition and Blue Wave NJ. Over 150 advocates gathered to trade ideas for stronger democracy in NJ. Bottom line: in 2019 grassroots leaders changed the narrative. In 2020 we will keep the pressure up AND build for something better. Watch out, local Jersey grifters- there are now hundreds of new residents who know how to file OPRA and the Pay-to-Play search function on ELEC! (And as Kate Delany reminds us: don’t forget to try multiple spellings of “Phil Norcross.” Sometimes he goes by P. Norcross, sometimes Philip, sometimes just Phil…)

Jersey’s scenery: Several films up for Oscars tonight were filmed in Jersey, including The Joker and The Irishman. We are confident Jersey’s ambiance is unique in the universe (let’s just say ya know it when ya see it), but we aren’t quite sure why we need tax incentives to entice these high-grossing films.

Iowa: Surprise! While the rest of the country kicks ’em while they’re down, to us, they’re a winner! Why? Iowa Democrats have the courage to actually have a primary (caucus) process that contains uncertainty and leaves important decisions up to voters. Is the caucus even that democratic? Definitely not, and much has been written about that. But the Iowa Democratic Party’s decision process does rely on individuals making choices, convincing their neighbors, party leaders embracing uncertainty, and adding up totals to produce a winner. And that is a simple, beautiful, elegant thing- even when it’s a hot mess. So hang in there, Iowa! Democracy is a total pain, but everyone thinks it’s STILL WORTH DOING!! Iowa, here in Jersey, we give you an A for effort.

Loretta Weinberg: Jay Lassiter’s column outlines what we hope Senator Weinberg’s committee will accomplish: a total accounting for the structural and upstream causes of bias in NJ’s political system. The #MeToo movement is the tip of the iceberg, one awful manifestation of the “good ole boys” political culture in NJ, but certainly not the only way power is exerted over women and people of color in politics. As Jay asks, “Will her panel, thus far rather preoccupied with Gov Phil Murphy’s shortcomings, examine the power dynamics that exist in the county- and municipal machine party politics? Or does that (massive) stone remain unturned because it might embarrass friends and colleagues?” We are looking to Tuesday with optimism. Can we move the conversation forward, towards fixing this deep, deep problem of inclusion in Jersey politics? Come on, Senator! That’s legacy material!

Joe Biden & County Chairs: Poor Joe’s lack of, well, a campaign? Is causing a headache for the NJ machine establishment. All they really want to do is bracket with someone totally basic in a race that doesn’t matter. Is that too much to ask? The faulty Jersey logic goes like this: Joe Biden, a candidate whose popularity is tanking, would have been the perfect candidate for the “swing districts” of CD2, CD3, and CD7. But why does the establishment continue to assume that uninspiring moderate candidates will win in these purple areas- a logic that failed in Iowa, will fail in NH and produced Jeff Van Drew? And, as Edward Edwards’ piece points out, “Never in the establishment conversation is a consideration of women candidates – both Elizabeth Warren and Amy Klobuchar are still competitive.” In a state where there are only a handful of female party chairs, where there’s never been a female Democratic governor or senate president, where our gains in equity have stalled… we’re hardly shocked. The same old establishment produces the same old dusty decisions. Paging Senator Weinberg!

Governor Murphy: Yes, it’s a topsy-turvy world, with Iowa on top and Murphy below. But we are deeply disappointed in his choice to attend the Norcross and Pelosi event (advertised all over NJ.com!) at the end of February. We get it, when Pelosi comes to town it’s hard to stay away, everyone wants to hang with #NancyTheRipper! But please, Governor, see this for what it is: a George Norcross power move and desperate calling-in-all-favors attempt to keep his family relevant amid major scandal. Democrats across the state should be angered at this waste of time and resources: why on earth is the Speaker hosting a fundraiser in a deep blue district, when time and energy could be spent on Kim, Malinowski, or any of the other delicate blue swing districts from 2018?! Meanwhile, we will take it as a compliment that national figures are flying in from all over to try to squash the growing South Jersey progressive movement. (Lol, good luck with that!)

Senate Committee on Tax Incentives:  An Inspector General is a good thing; so are community benefit agreements, though the devil is in the details, of course. The Senate has really moved a long way since the Wild West days of 2013-  great job advocates for keeping this in the news for over a year! However, we aren’t budging: No Caps, No Deal. NJ’s multi-billion-dollar tax incentives program fuels an entire cottage industry of politically-connected law firms and consultants, who in turn do favors for legislators. Why is the Senate so committed to continuing uncapped incentives? Their loyalty to good policy, no doubt! #Kidding