We believe that no matter where we come from or what our color, most of us want the same things. We want to earn enough to thrive, not just survive, and leave a better future for our kids. We want healthy food and clean water, safe neighborhoods and a safe world. We want to be free.

But the richest people on Earth — and the political insiders who serve them — have rigged the rules of our economy and our democracy to grab up wealth and power for themselves. They have defunded our schools, undermined community services, and stripped working people of the right to organize into unions. And then they blame poor people or people of different races or different places — aiming to divide us and distract us from what we have in common.

The Working Families Party is regular people coming together across our differences to make a better future for us all. We’re a multiracial party that fights for workers over bosses and people over the powerful. We want an America which realizes the promise – unrealized in our history – of freedom and equality for all.

But the Working Families Party is building our own party on top of the two-party system in the United States — and it’s working. We organize outside the two parties, and then we recruit and train people-powered candidates up and down the ballot and run them to win.

Sometimes we run candidates through Democratic Party primaries, and other times we run candidates on our own. We take on elections from city council to U.S. Senate — wherever there’s a path to win, and where winning will advance a people’s agenda, elevate visionary candidates, and help build the multiracial movement we need to win the America we deserve.

This is not just an idea — it’s reality. For more than two decades, we have been recruiting, training, and electing transformational leaders across the country. We’ve then organized with them to win major victories for working families — like higher wages, a fairer criminal justice system and getting money out of politics.

The wealthy and the powerful tell us what we are trying to do is impossible. They are counting on us to believe it, so that we don’t even try. But we are doing it. And together, we can do so much more and become a nation rooted in dignity, compassion and justice for all.

Today, hundreds of thousands of people are part of the Working Families Party, in every part of the country. There are many ways for people to be active in the party locally and nationally, including in our state chapters and local branches.

Anyone can become a WFP supporter by signing up and affirming our values. From there, we invite you to attend a Welcome Gathering, where you can learn more about WFP and meet other people who want to build the power we need to get the world we deserve. You can also become a dues-paying WFP member today by contributing $10/month or $120 annually. 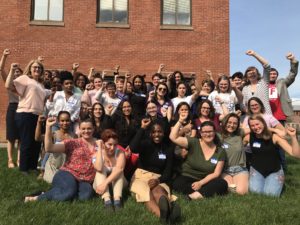 Join Us! Become A WFP Member

We are the party of the multiracial working class, fighting for our freedoms and to build a nation that cares for all of us. Join us: